Firstly, SSBs should be avoided in the first two years of life in favor or water after a period of exclusive breastfeeding due to the risk of ECCs and priming taste preferences for sweet foods and drinks later in life.20, 37-41 Subsequently, SSBs should continue to be avoided at all ages as they provide little nutritive or health benefit. At the most, daily intake of calories from free sugars should not exceed 10% of total calories, and reduction to less than 5% likely has added benefits.

Lastly, oral and general health civil societies should cooperate to produce evidence, policies and guidelines on SSBs and health outcomes with an emphasis on the social determinants of health, common risk factors and universal health coverage.

IADR and AADOCR also support addressing research gaps to establish the link between pricing policies to reduce SSB consumption and oral health outcomes in developing countries; investigate the effectiveness of proposed interventions such as policies affecting marketing and advertising, food production, portion size regulations, etc. for which there is currently limited evidence42 and to strengthen understanding of the role of SSB consumption in the development of other NCDs.31

Based on the best available evidence of the role of SSBs as a source of free sugars and a common risk factor for the development of dental caries and other chronic diseases, IADR and AADOCR support avoiding consumption of SSBs.

SSBs such as regular (i.e., non-diet) carbonated soft drinks, fruit drinks, sport or energy drinks, are major sources of free sugars. Free sugars are defined by the World Health Organization (WHO) as “all monosaccharides and disaccharides added to foods by the manufacturer, cook or consumer, plus sugars naturally present in honey, syrups and fruit juices and fruit juice concentrate.” The definition of added sugars is similar to free sugars but do not include those found in 100% juices, and neither definition includes those found in whole fruits and vegetables. Examples of sugars include fructose, high-fructose corn syrup and sucrose, among others.6, 7 In 2010, global average intake of SSBs equaled that of milk and was highest in men aged 20-39. SSB consumption was highest in middle-income countries, particularly Latin America and the Caribbean, and lowest in high- and low-income countries.8 From 2009-2014, SSB sales increased in low and middle income regions such as North Africa and the Middle East while they declined elsewhere.9 During 2015-2016, U.S. adults and adolescents ages 12-19 consumed ≥ 50% of their added sugars from beverages, and non-Hispanic Black and Hispanic children consumed more SSBs than non-Hispanic White or Asian children.10, 11

The causative role of sugars in the development of dental caries is well-established by biological and epidemiologic data, including systematic review. Dental caries is the destruction of the dental hard tissues often leading to pain, infection or tooth loss and contributes to missed school or work and to limited social interaction. Caries-related bacteria are part of a complex community of naturally-occurring microorganisms that reside in the mouth.12 A high amount and frequency of sugars consumption causes dysbiosis – a shift away from a healthy balance of microorganisms – and makes the microorganisms that live and grow on the surface of the teeth more likely to cause caries. These microorganisms metabolize sugars, resulting in acid production, which will be responsible for the enamel demineralization, which, if not controlled, will ultimately result in caries.13 Streptococcus mutans, abbreviated S. mutans, is one of the most studied and well-understood caries-related bacteria.14 In addition to metabolizing sugars resulting in acid production, S. mutans produces and releases enzymes called glucosyltransferases, which metabolize sucrose to produce molecules called polysaccharides. Polysaccharides facilitate adhesion of the bacteria to the tooth surface and to one another and create localized acidic areas on the dental surface resulting in tooth demineralization, which over time leads to the development of caries.15 Furthermore, carbonated drinks and other types of SSBs are acidic and can cause enamel and dentin demineralization and destruction by their extrinsic application to susceptible tooth surfaces in a process called dental erosion.16

Evidence from studies performed in multiple countries have shown an association between consumption of free sugars, including those supplied by SSBs, and dental caries in both children and adults. Most compellingly, a comprehensive systematic review of 55 studies on the association between free sugars and the development of dental caries showed less caries experience when free sugars intake decreased and more caries experience when free sugars intake increased. This study was pivotal in developing the WHO Guideline which included recommendations that children and adults should limit calories obtained from free sugars to less than 10% of total daily calories intake (about 12 leveled teaspoons in a 2,000 calorie diet) and that further reduction to less than 5% (about 6 leveled teaspoons) would likely have added benefits.6, 17 Furthermore, studies in Finland showed a relationship between sugars intake and caries in adults, with one study showing 1-3 SSBs per day was associated with ~30% increase in dental caries.18, 19 Studies in Brazil showed associations between dietary habits that included SSBs and caries in children and adolescents. Early childhood caries (ECC), which is defined as “tooth decay in pre-school children which is common, mostly untreated and can have profound impact on children’s lives,”20 is a particular concern. Four-year-old children in Brazil who were given SSBs in the first year of their lives were more likely to experience severe ECC. An international panel of experts determined that SSBs are a risk factor for ECC and recommended limiting intake of such beverages in favor of fluoridated water.21, 22

"In addition to dental caries, SSBs and free sugars are common risk factors for obesity, type 2 diabetes and cardiovascular disease."

The International Association for Dental Research (IADR) and the American Association for Dental, Oral, and Craniofacial Research (AADOCR) support avoiding consumption of sugar-sweetened beverages (SSBs) in order to reduce intake of free sugars, which include added sugars and sugars in 100% juices, to decrease the prevalence of dental caries (or tooth decay) and other non-communicable diseases (NCDs) such as obesity, type 2 diabetes and cardiovascular disease. According to the Global Burden of Disease 2015 Study, untreated dental caries in permanent teeth is the most common global health condition, affecting 2.5 billion individuals. Untreated dental caries in primary (deciduous or “baby”) teeth ranked 10th among most common global conditions, while tooth loss ranked 36th. Global dental expenditures reached nearly 300 billion US dollars, and the cost of untreated dental caries in both primary and permanent teeth due to lost productivity exceeded 27 billion US dollars.1, 2 Due to their high health and economic burdens, steps must be taken to prevent all dental diseases, including dental caries. Both IADR and AADOCR have established healthy meetings policies that exclude the use of IADR and AADOCR funds to purchase SSBs.3, 4 Both IADR and AADOCR have changed their investment policies to screen for exclusion of SSB companies to align the Associations’ investments with their missions of driving dental, oral, and craniofacial research for health and well-being worldwide.5

According to the Global Burden of Disease 2015 Study, untreated dental caries in permanent teeth is the most common global health condition, affecting 2.5 billion individuals 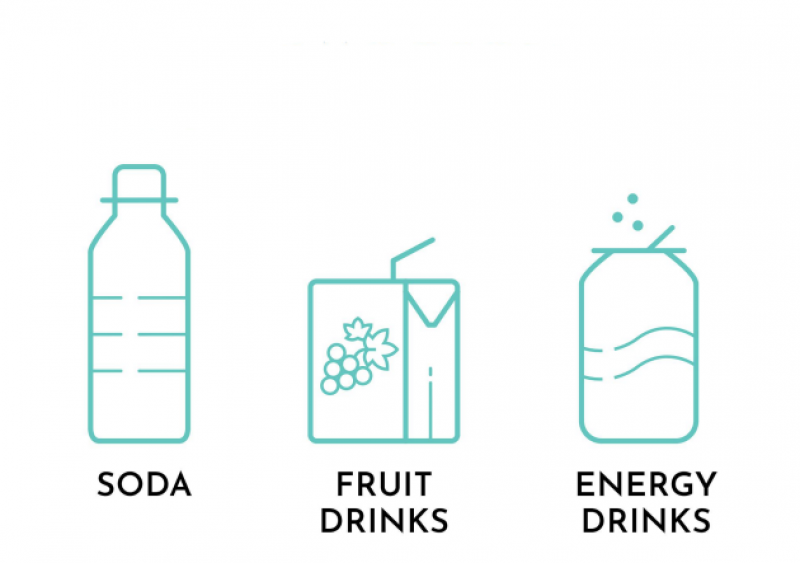 Infographic: Why Should I Avoid Sugar-Sweetened Beverages?

We support addressing research gaps on interventions to reduce sugar-sweetened beverages (SSB) consumption and to strengthen understanding of the role of SSB consumption in the development of other NCDs.